It’s that time of year when many of us contemplate going into hibernation, but given that this is not an option for most, an alternative is to seek a reviving, restoring taste of spring water.

As nature awakens after a long winter nap join us on a visit to The Chalybeate Spring of Royal Tunbridge Wells. Experience a revival from Mother Nature with a drink from the health giving natural spring. The word chalybeate means iron-rich, giving the waters a unique taste. 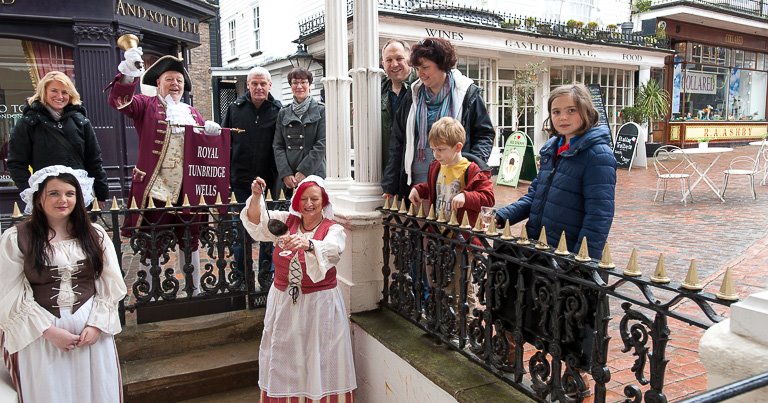 Early in the 17th century, Chalybeate water was said to have health-giving properties and many people have promoted its qualities. The Chalybeate Spring at Tunbridge Wells was discovered in 1606 by the young nobleman, Dudley Lord North – 3rd Baron North, a distinguished courtier during the reign of King James I. Having lived a fashionably excessive lifestyle, he retired to the countryside in an unsuccessful attempt to repair his health. Travelling through woodland on his return to London he noticed the reddish brown waters of the spring seeping from the ground. Lord North drank the water to quench his thirst. Feeling much rejuvenated from drinking the cool iron-rich spring water, he declared it to be health-giving to all his friends and acquaintances. He found his health completely restored and lived to the age of 80 – coincidence or not?  Who can say?!

The news of the spring and its exceptional properties circulated and noble visitors from London and elsewhere flocked to the resulting hamlet springing up alongside the natural spa. Since it wasn’t far from Tonbridge (originally spelled Tunbridge), already a town, it later became known as Tunbridge Wells.

In the eighteenth century, the Chalybeate Spring became a vital daily custom for any honourable lady or gentleman visiting ‘The Wells’. Each day began with a tumbler of the spring water, followed by a “promenade” on The Walks, now known as The Pantiles. During its heyday in Georgian times, the ‘Walks’ became the perfect place to see and be seen.

The Chalybeate Spring is situated at the northern end of the Pantiles.

The Chalybeate spring water was served by someone called a ‘Dipper’ for a small fee – not for the water, which has always been designated as belonging to the people, but for serving the medicinal solution in a genteel fashion.

This tradition carries on today; it is still possible to sample the cool Chalybeate Spring water served by a Georgian costumed dipper.

Spring is the time of new beginnings! Come out and feel like royalty on a tour with Britannia Coaches in 2017 including the town of Royal Tunbridge Wells and a trip to The Chalybeate Spring. Let us drive for you so you can feel treated and refreshed.