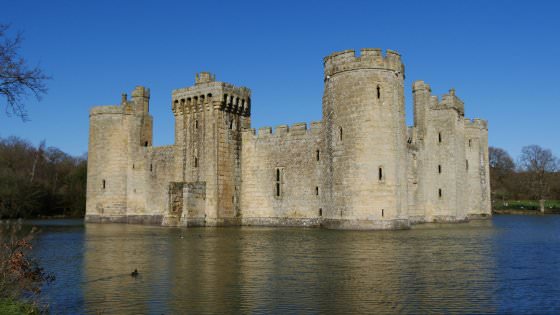 With the most romantic day of the year just around the corner, the medieval ambience in Bodiam Castle is the ultimate setting to enjoy a tryst with that special someone. Located near Robertsbridge in East Sussex, Bodiam Castle is one of Britain’s most picturesque and romantic ancient monuments. Lovers are powerless to resist the romantic allure of the 14th-century castle surrounded by its own reflections in the moat; it really is a vision for lovebirds to visit. Set in the heart of a historic landscape, it boasts spiral staircases, battlements and a portcullis; windows where arrows were once shot (perhaps cupids’ arrow this Valentine’s Day!). With a majestic tower that – once-upon-a-time – was a look-out, and ruins that were walked upon by knights and ladies, you could be a shining knight to your lady at Bodiam Castle! There is no better way to get in the romantic frame of mind than with a wander around this fairytale castle.  Love is in the air, stories of sweeping romantic gestures and secretive love affairs lie waiting to be discovered.

Bodiam Castle was built in 1385 by Sir Edward Dalyngrigge a former knight of Edward III, seemingly to defend the area against French invasion during the Hundred Years’ War. Possession of Bodiam Castle passed through several generations of Dalyngrigges, and then by marriage to the Lewknor family.  When Richard III became king in 1483, a force was despatched to besiege Bodiam Castle. It is unrecorded whether the siege went ahead, but it is thought that Bodiam was surrendered without much resistance. The castle was returned to the Lewknors when Henry VII became king in 1485. Descendants of the Lewknors owned the castle until at least the 16th century.  By the start of the English Civil War in 1641, Bodiam Castle was in the possession of Lord Thanet. He supported the Royalist cause and sold the castle to help pay fines levied against him by Parliament. The castle was subsequently dismantled and left as a ruin until its purchase by John Fuller in 1829. Some restoration work was carried out before changing ownership again, being sold to George Cubitt, 1st Baron Ashcombe, and later to Lord Curzon, both of whom undertook further restoration work.

Bodiam Castle has a history of grand gestures of love – rumour has it Lord Curzon was inspired to propose here!  The impressive and beautiful symmetry of Bodiam Castle is a perfect setting for a memorable wedding day, licensed to hold civil ceremonies in the main gatehouse of the castle.

The castle has been owned by The National Trust since 1925, donated by Lord Curzon on his death, and is now protected as a Grade I listed building and Scheduled Monument.

Popular with location scouts, the castle has appeared in the movie ‘Monty Python and the Holy Grail’, an episode of the TV show ‘Doctor Who’ and a music video by Enya.

During the cold winter months of January and February, you can have your imagination inspired by a medieval storyteller spinning tales by candlelight. Sir Edward Dalingrigge ensured the castle had many features for the comfort of his family so you can bask in the warmth from one of the thirty-three fireplaces in the castle and imagine yourself back in centuries past.

Outside the castle, you can climb up the steep spiral staircases to reach the top of the massive towers, where you will be rewarded with the most incredible views across the Rother valley.  As well as climbing up, you can take a few steps down from the castle courtyard and see the well room. The great hall with its vaulted roof and impressive arched window, probably glazed with stained glass, would have seen many a feast and celebration. As you leave, look up and see the murder holes above you in the gatehouse tower.  All manner of unpleasant things would have rained down on any unwelcome visitors in the past. There are also the remains of the iron-clad oak portcullis, thought to be among one of the oldest in England, and above the studded oak doors are the badge and shields of the Dallingridge family.

Stroll around the grounds and watch the squirrels busily uncovering the acorns that they buried in the earth beneath the great oak trees. Bodiam Castle has its very own bat colony and one of the earliest ever births of wild baby bats in the UK were recorded at Bodiam Castle in 2013. The fish that you’ll see in the moat as you cross the bridge to the castle are carp; in medieval England, carp were a regular food source and bred specifically for that purpose by monks. Wild bees nest on the courtyard wall close to the three arches, they’re very docile and closely monitored so visitors do not need to be concerned.

The Castle View Coffee Shop is located in Castle Cottage opposite the entrance to the castle. The newly refurbished Wharf tea room serves a delicious light lunch or cream tea. There are a number of local products on sale at the Castle Gift Shop including honey from the Castle’s very own beehives.

Visit Bodiam Castle with Britannia Coaches – a perfect day in a perfect setting.