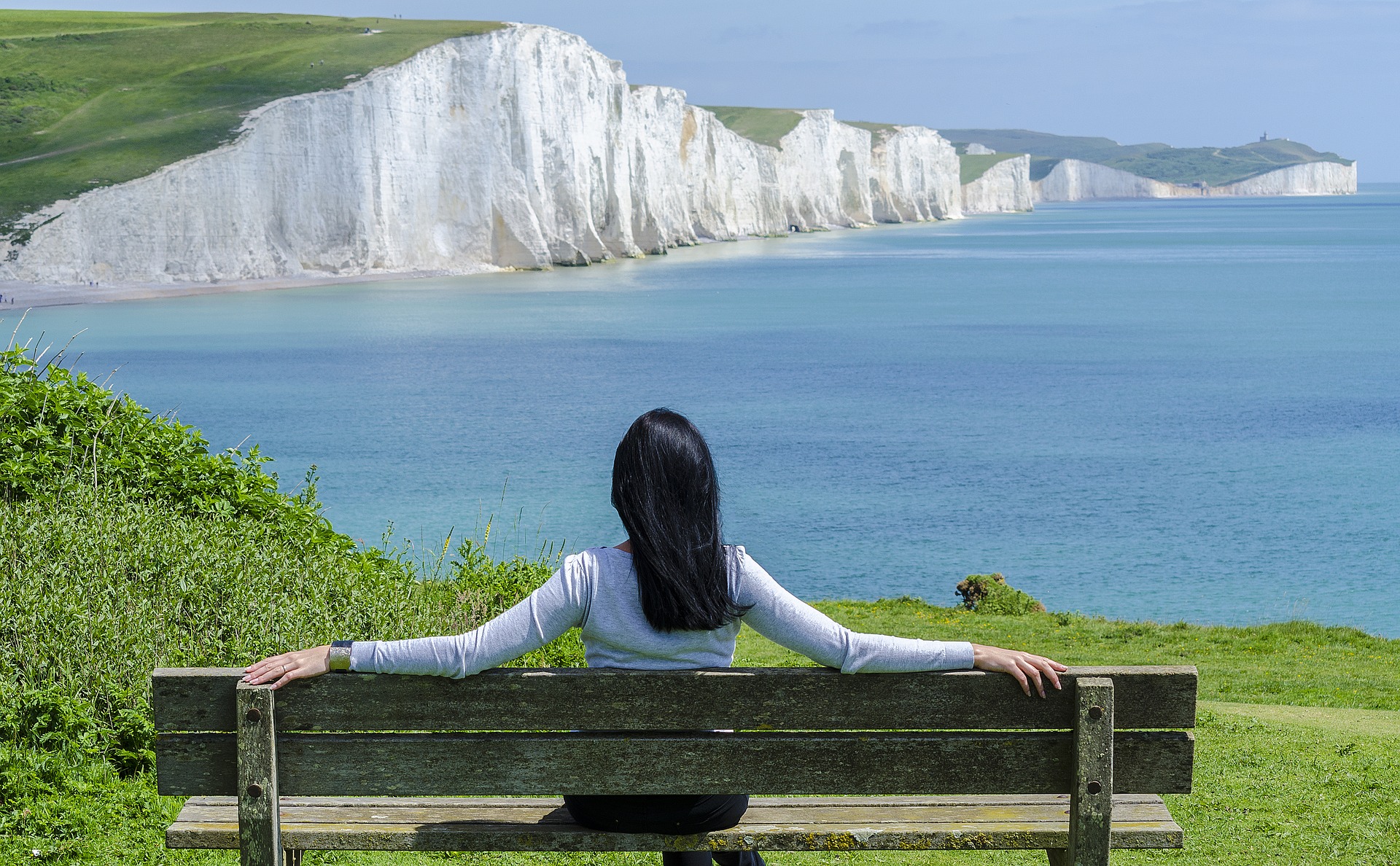 The beautiful coastal town of Eastbourne is an elegant seaside resort which holds a unique mix of classic charm and an impressive array of modern amenities. A rich tapestry of culture and heritage can be discovered strolling along the grand three tier promenade, where you can marvel at the splendor of the Art Deco architecture which overlooks the seafront. Pay a visit to the famous Carpet Gardens next to the Bandstand to enjoy the most spectacular flower displays that you are ever likely to encounter. Eastbourne is proud of its well preserved 1930’s bandstand, one of the most distinctive sights in Eastbourne with its blue dome and silver finial. The award-winning beaches with their quality waters are just perfect if you fancy dipping your toes!

Everything is within easy reach with the seafront promenade virtually leading straight on to the foot of the beautiful Eastbourne Downs and Beachy Head. Take in the sheer natural beauty of the South Downs National Park famous for its rolling hills and quaint villages. The incredible Seven Sisters chalk sea cliffs including Beachy Head with dramatic 530ft cliffs are quite renowned in East Sussex and come with their own pair of lighthouses. The Belle Tout lighthouse is the only residential lighthouse in the country. Belle Tout lighthouse is a decommissioned lighthouse and British landmark, Grade 11 listed building, open to visitors and definitely worth a visit, the views are stunning! The Beachy Head lighthouse is famous for its iconic red and white stripes. 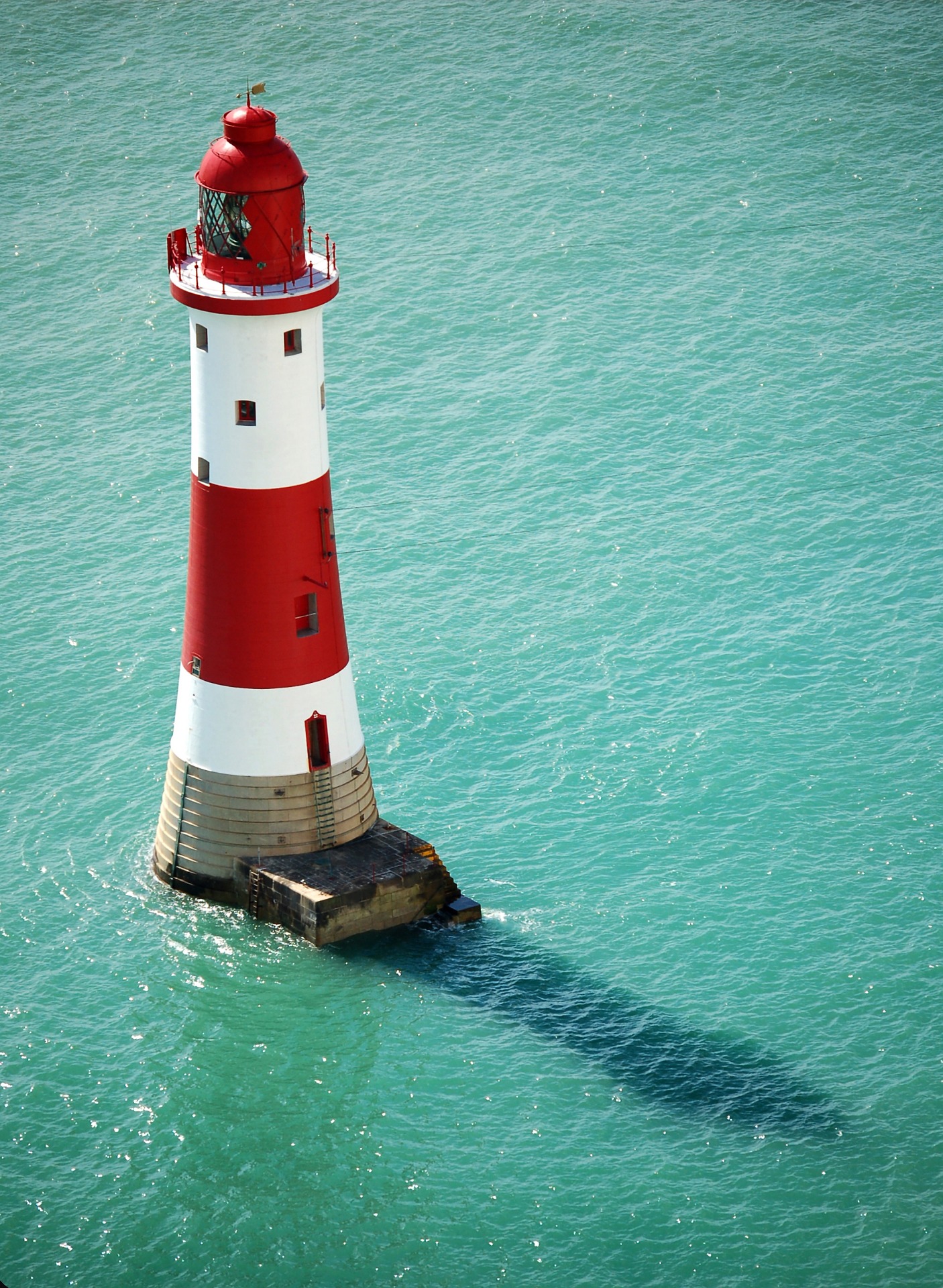 Serious seaside landmarks come thick and fast in Eastbourne. The beautiful grade 11 listed Victorian pier, being the town’s pride and joy. Take a stroll to the end of the pier to try the Victorian camera obscures to view the seafront in amazing 360 degree projections. The historic Martello towers are a chain of forts built on the south coast as a protection against Napoleon. They add much character to the surrounding coastline. The Wish Tower is listed a grade 11 ancient monument, it has its own museum and is the best known of all the towers.Uncover over 200 years of history at the unique Georgian Redoubt Fortress and discover its hidden secrets. From its early beginnings as a Napoleonic defense to a base for Canadian troops before the D-Day landings, the Redoubt has a varied history and is recognised by English Heritage as being of national importance! 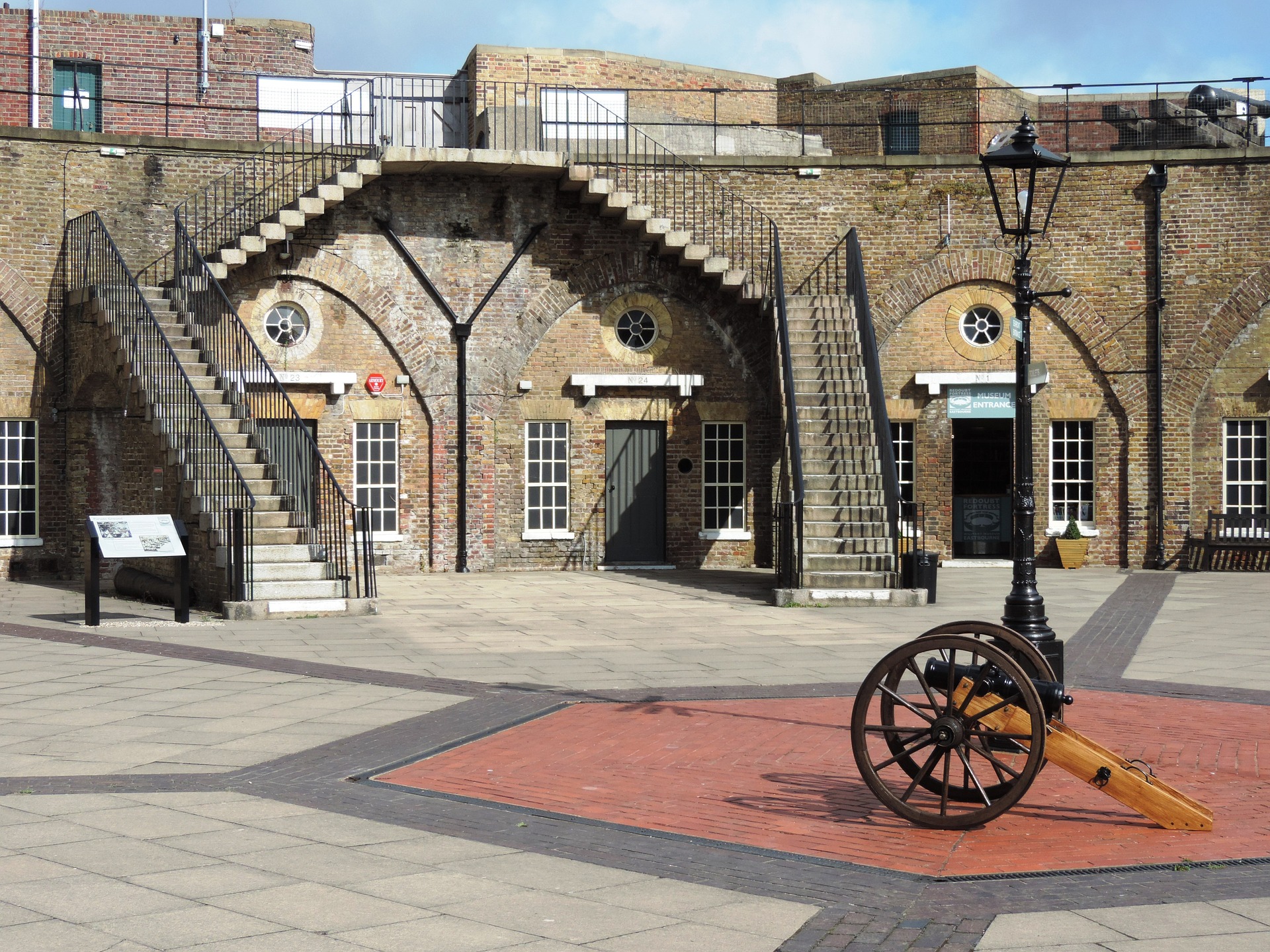 For an out of this world experience budding scientists can enjoy a fantastic hands-on experience at The Observatory Science Centre, set among the domes and telescopes of a world famous astronomical observatory. There are many galleries to visit and interactive exhibits to get your hands on. Blue Peter badge holders can get in for free.The Observatory Science Centre is hosting a special event during British Science week on March 18th and 19th.

The vibrant Cultural Quarter is home to The Towner Art Gallery. The contemporary art museum presents a unique programme of major exhibitions of contemporary and historic visual art alongside displays from the internationally renowned Towner Collection, The Musgrave Collection, Henry Moore and Pablo Picasso.

Be sure to visit the cosmopolitan Sovereign Harbour Marina, the perfect location in which to unwind, away from the hustle and bustle of modern life. Hundreds of yachts are moored in the harbour and there is easy access to the English Channel, making it the ideal spot for water sports. It’s one of the south coast’s premier marinas boasting four linked harbours and a retail zone. The Waterfront has an impressive range of shops and galleries and is quite the perfect spot for alfresco dining and relaxation.

The historic origins of Eastbourne certainly date back a long way, with Roman artefacts found beneath the town and Stone Age items dug up in the surrounding countryside. The Domesday Book makes reference to a number of buildings and sites listing 28 ploughlands, a church, a watermill, fisheries and salt pans. Eastbourne derives its name the Bourne stream which rises in the present Motcombe Park. During the middle ages the town was visited by King Henry I and in 1324 by Edward II.The town began to grow as a seaside resort following a visit by King George III’s children in 1780, and became known as the Empress of Watering Places. Eastbourne played a key role in World War II, as many children were evacuated to the town. However, after France fell in 1940, it was believed that Eastbourne was vulnerable to an invasion, so many were moved again. Since then, there have been plenty of new developments in Eastbourne and the town now has a new face that has enhanced its appeal. Eastbourne had a reputation as a resort for the retired, but many believe that opinion is outdated with the town being a great place for people of all ages. 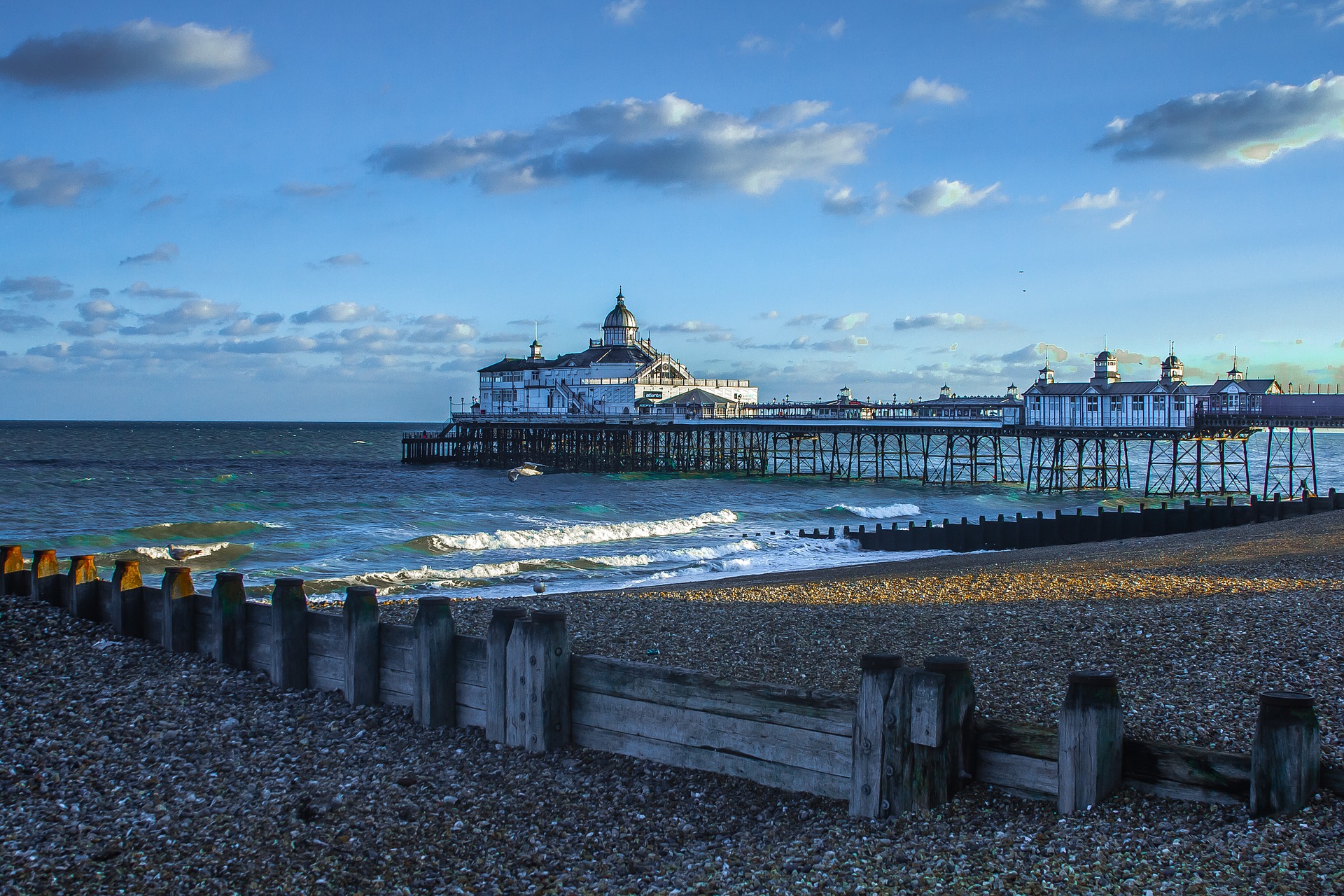 Several famous people hail from Eastbourne and many others have been frequent visitors over the years. Charles Dickens is said to have been a frequent traveller to the town, he would visit the historic 14th century Lamb Inn and Theatre to perform amateur dramatics during the 1830’s. The composer Claude Debussy stayed at Eastbourne’s Grand Hotel whilst writing La Mer.

Eastbourne and Beachy Head have featured in many Hollywood movies, British films, iconic TV shows and advertising campaigns. Famous silver screen movies include Pearl Harbour staring Ben Affleck and Kate Beckinsale and Robin Hood-Prince of Thieves staring Kevin Costner. A scene from the James Bond movie The Living Daylights was filmed off Beachy Head where a secret agent parachutes from a Land Rover. Chitty Chitty Bang Bang also chose the famous cliffs for its car chase where the car drove off the cliff tops and opened its wings to fly. The South Downs have been used to film Harry Potter scenes from the Quidditch wizarding match played on broomsticks in the Goblet of fire. Eastbourne pier was used as a backdrop in the remake of the classical Brighton Rock movie staring Helen Mirren and John Hurt.

On the television screen, the town has made many appearances including Miss Marple and Top Gear. The bandstand has featured in Foyle’s War. Beachy Head is seen in the 4th television series of Luther and The Beachy Head lighthouse gained fame through the BBC drama The Lives and Loves of a She-Devil. Little Britain’s Ladies played by Matt Lucas and David Walliams filmed at the famous carpet gardens. Music promotions for Blur and Del Amitri have filmed at the Bandstand, Eastbourne bandstand is the busiest bandstand in the UK.

When you visit Eastbourne you will discover why it is so popular and used by many for its unspoilt dramatic views. The town’s seafront offers a unique elegant location which proves to be a real draw with film companies.

Eastbourne has a huge variety of entertainments and events to suit all ages and tastes. The town is well known for hosting international events such as the AEGON international lawn tennis tournament and Eastbourne Airbourne international airshow. Eastbourne is excited to announce a brand new event for 2017, the fantastic Eastbourne International Hot Air Balloon Festival!